Firstly, a confession.  I haven't actually had my camera out since the visit to the Lake District six months ago.  I'm not entirely sure why.  I suspect that the trips to Dorset, Cornwall and the Lake District spoiled me a bit.  It's been very difficult to find inspiration in the flat landscape where I Iive.  I've been going for walks with the dogs every day in the same old bit of forest and completely lacked any desire to photograph it.  Another thing may have been that the trip to the Lake District didn't result in the spectacular shot that I'd been hoping for, which probably knocked my confidence a bit.  Despite wanting to get the camera out, I've not had the enthusiasm to actually go to the trouble of doing it.  Until last week.  My brother sent me a link to some photographs taken at Thornham Old Harbour, which isn't too far away from me and I thought "I'll go there and get some myself".  At some point.

I had a quick look on Google Street View to get a rough idea of what to expect, then took a look at the weather for the next morning.  It said a little high cloud and quite a lot of low cloud.  A spectacular sunrise usually happens when you get quite a bit of high cloud and a little low.  I wasn't expecting much, but I thought I'd get up nice and early (4.30am), take a drive and get there about half an hour before sunrise to give me time to have a look around and settle on a composition.

When I got there, I found an old building with a derelict sailing boat nearby, which looked very promising.  I had a walk around to see what else there was and decided that I'd concentrate on that.  There's a small river running next to the building and some boats parked along the bank, but the tide was out, so it wasn't worth getting at the time.  Maybe when I return.

Initially, I chose a composition which included the building, boat and a rope which was attached to it leading into the foreground.  After taking some photos of that, I thought a better shot would be to get closer to the boat so that it filled most of the frame (including its mast).

The sun was just rising and casting a lovely warm light on everything.  The low clouds provided a nice background.

I took a second photo of the boat from the other side, with the building behind me. 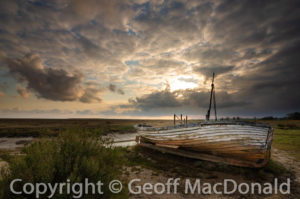 The sun was a bit higher in the sky, so the light was a little less warm and there were some quite heavy clouds to the right, which gave it a bit more of a moody feeling.

It was a good morning, but after only 4 hours of sleep, quite tiring!  And definitely good to get the camera out again.