The sky at Durdle Door was much less heavy the following day, but the wind was probably stronger. After getting there, I went straight to the location that I'd decided on the day before and set everything up. As the sun went down, I took a number of groups of photos, all with a 10 stop ND filter. Each group was at different exposures ranging from 1/4s to 15s so that I could capture the sky, sea, and land and use exposure blending to create the final image.

I started at 5.30pm and when I took my third set about 20 minutes later, a realised that the wind had blown so much grit and dirt over the camera that the later pictures were useless: 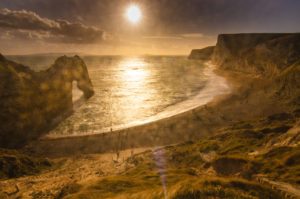 So I set to carefully cleaning the filter, which was made more challenging in the high wind as the grit was quite sticky, so difficult to remove without scratching the filter and I was very concerned that the camera might fall when I wasn't holding it down.  After this, although I was careful to keep the camera covered between shots, I still needed to clean everything a few more times before I finished for the day.

I was hoping that I'd get a photograph with the sun really low on the horizon and some more after it set, but a bank of cloud came in before that happened.  Although it wasn't quite what I was hoping for, I'm happy with the final result.  I kept the long exposure of the sea in the final picture so that the scene appears calm and peaceful, unlike the experience of taking the photograph at the time!

4 thoughts on “Another windy evening at Durdle Door” 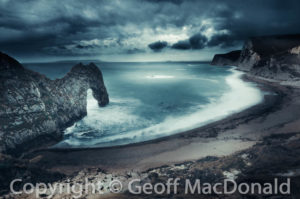 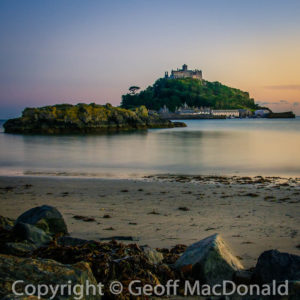