Last weekend, I was watching some extras for the Tom Hanks movie Cast Away and it was showing the filming of one of the night scenes… in the day. I thought that I might see if i could try the same with a photograph.

A few weeks ago I went out to take an early morning shot of the local church. However, it quickly clouded over and there wasn’t really anything worth taking but I took one anyway. This was at 11mm, so there as quite a bit of distortion. 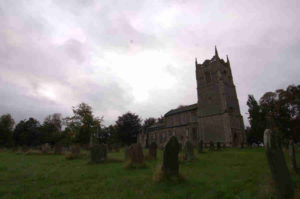 I thought that this might make a good candidate to turn into a nighttime graveyard scene.

I started in Lightroom and the first thing was to correct the vertical distortion and remove the spots (I really must get my lens cleaned). 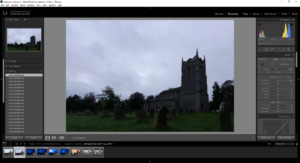 To get the night effect, I adjusted the white balance to make the image a lot colder, reduced the exposure and made a few adjustments to the highlights, etc. Click the images below to see the settings that I used. 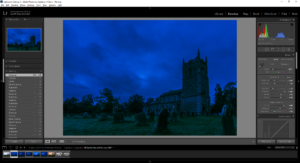 I then used split toning to make the sky a little deeper blue and the darker grass a little more green. 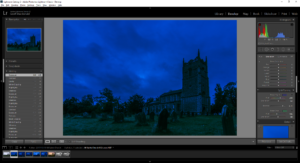 This is already quite a nice moody night looking shot, but I thought it would be better if the lights were on in the church. To do this, requires using Photoshop. SO, right click the image thumbnail in Lightroom and Edit In-> Photoshop.

The plan is to create two layers, the top layer is the image as created above and the background layer is warmer and over exposed. Then edit the top layer mask so that the lower layer shows through where the windows are. That last bit is quite fiddly.

Once open in Photoshop, I added the following adjustment layers:

This gave me an image with orange/yellow windows: 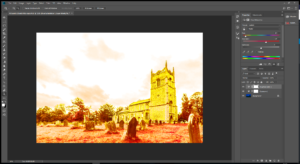 I then duplicated the background layer, placed it on top and added a layer mask.

Next comes the fiddly part, requiring much patience! Zoom in and using the brush tool, paint in black over the windows. This will reveal the warmer and brighter background layer. 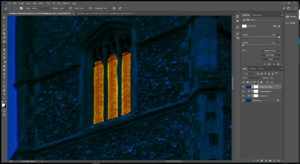 Once all of the windows are done, you’ll have something like this. Apparently, it’s not normal for a church to have the tower illuminated, but I’m sure that they would if they want to look pretty at night 😉 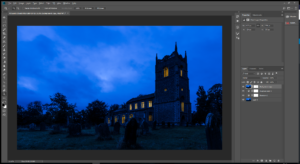 Finally, wouldn’t it look better if the moon was out?

Using a photograph of just the moon, add that to a third layer above the other two. It’s best to resize it and cut just the moon from your photograph so that there is no background before adding it to the layer.

Set the layer to “lighten”, which will blend the moon into the sky and add a layer mask. There may be easier ways to do the next bit, but I then opened the original photograph into a new image, made it into greyscale and increased the contrast to emphasise the clouds. I copied a section of this into the moon’s layer mask. To do this, you need to go to “channels” and select the mask before pasting. I moved the mask around until the moon appeared to have some wispy clouds in front of it. 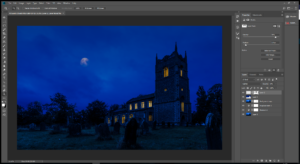 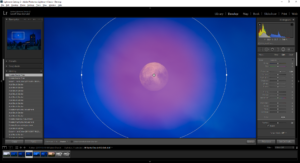 The final image is shown below: 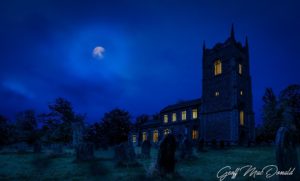