We had a visit to Oxburgh Hall, Norfolk last weekend.  The Hall was built around 1482 by Sir Edmund Bedingfeld, and is a good example of a late medieval, inward-facing great house.

It was a very windy day (30mph), and the clouds were moving quite quickly, so the first photograph that I took was an 8s exposure at f/11 and with a 10 stop ND filter.

The sun was low but very bright and it was almost impossible to see the camera’s LCD clearly so I composed the shot through the viewfinder before inserting the filter.  I needed quite a wide depth of field, and I couldn’t check the focus by zooming in on the LCD as usual, but as I was using a wide angle lens, The gears in the foreground were about 1.5m from the camera, so I set the focus to 2m.  I shielded the camera from the wind and waited until the speed dropped a little before taking the photo to minimise camera shake. 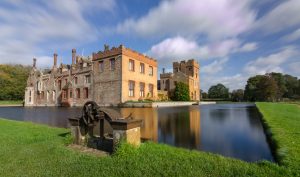 The next photo was from within a little woodland area and the trees were framing the hall.  I didn’t go for a long exposure as there would have been far too much movement of the branches.  I used a polariser to bring out the contrast in the sky a little and opened aperture up to f/8, waited for the wind to die down a bit and took a shot at 1/60s.