At the end of March, we loaded up the car and went on a trip to Western Scotland for a week.

After an 11 hour drive (half of which was through some amazing scenery, so it wasn’t that bad), we arrived at what was to be our home for the week at Achleek on the bank of Loch Sunart.

The geography of Scotland is quite a contrast to the flatness of Easts Yorkshire and Anglia, to which I have become accustomed.

The next morning, I was up nice and early to try to get a “sunrise over the Loch” shot.  The sky was completely clear, which makes a dull photo, but I got a panorama of what may be Beinn an Albannaich behind Loch Sunart.

After breakfast, we took a walk along part of the South shore of the Loch for the afternoon and then headed out to Ardnamurchan Lighthouse, a 19th Century lighthouse located at the most Westerly point on the British mainland for sunset.  The thing with Scotland is that pretty much the whole time you’re driving, you want to keep stopping because the view is amazing.  So you end up just looking and driving; otherwise you don’t get anywhere.  However, we did have to stop at Ardslignish (according to The Meaning of Liff: Ardslignish (adj.)  Adjective which describes the behaviour of Sellotape when you are tired).

We arrived at the lighthouse just in time for sunset, so off I went scrambling down the rocks to get a shot of the lighthouse and another of the sun.

Monday was a trip to see the Glenfinnan Viaduct, a railway viaduct on the West Highland line and used as a location in several films and TV series probably most famously in the Harry Potter movies.  On the way there, we realised that we’d (OK, I’d) left our water behind.  We weren’t (OK, I wasn’t) too worried as surely we’d pass a shop or garage on the way.  Also, there’s a visitor’s centre near where we were going to park.  When we got there, having not passed any shops or garages, the visitor’s centre was closed as it was out of season.  Oops.

We headed out anyway on a walk that took us under the viaduct and up above it where I got yet another panorama.

We stopped to eat our lunch, then turned back in search of liquid, which we found at Glenfinnan House.

The drive back to the cottage took us along the Southern and Western shores of Loch Eil, which of course had some more tremendous views, including Ben Nevis, at 1,345m above sea level, the highest mountain in the British Isles. 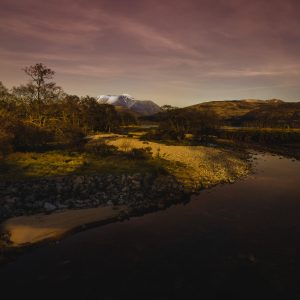 Tuesday was a trip to Kentra Bay and the Singing Sands.  We (OK, I) remembered to take the water this time.  The walk from Kentra starts at a small car park, goes along a track next to the water, through forest and ends at the singing sands.

Unfortunately, the forest had been used for a year filming a Channel 4 series Eden so the track through was covered in small rocks, presumably to make it easier to drive the TV vehicles but very difficult to walk on and had a solid wooden fence all along the right to wall in the contestants.  However, the beach was beautiful and peaceful.  We stopped to have lunch and an explore before heading back home.

Wednesday began with another attempt to get a nice photo of Loch Sunart at sunrise.  There was some rain beginning to move in, so the sky was getting more interesting.  I took another panorama

We then went to visit Aoineadh Mor, the remains of a small farming community of 22 houses.  The people were tenant farmers and forced to leave their homes in 1824 by the new landowner during the Highland Clearances.  An account by Mary Cameron of the “flitting day” read by Anne Sinclair can be heard here.

Thursday was to be a walk from Samalaman to Smirisary.  We didn’t have a good start to this as the guide was “a bit wrong”.  It started by telling us to go through what was clearly a private gate and garden.  We walked around for a while and found an alternative start which was a bit more acceptable.  It then took us through some boggy ground and up a small hill.  At the top of the hill the track disappeared.  When we came to a roughly 10m drop, we decided that the marked route was probably not to be trusted, so we retraced our steps and went around.  This meant walking over (sometimes over, sometimes in) some very boggy ground.  After a while, the dogs spotted something very exciting and pulled me over.  I was a bit grumpy.  We took a detour and found some rocks near the beach to stop and have lunch, then decided to cut the walk short as the next part was through the boggy ground and along/through a field of sheep.  With the dogs getting excited, we didn’t want to have them barking and upsetting the animals.

This was our last day, and we spent the day exploring close to the cottage.

We started by heading East.  It had been raining for a couple of days, so the mountain had quite a few waterfalls coming down into the Loch. 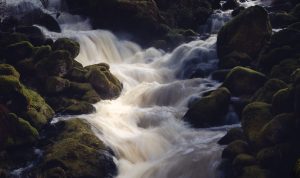 And a nice rainbow, too.

We then went West as far as the Laudale Estate and let the dogs have a play on the shore.

After that, we went back to the cottage.  The sun was beginning to set and the sky turned quite spectacular.  I wasn’t quite prepared for it and didn’t have time to get to a good location for a shot, but I quickly took this from the cottage.

After that, we packed everything up ready for loading into the car in the morning.  It was very difficult to leave.

Check my Instagram account for more photos.
I’ve put together a short video of these and a more photos/video from our trip.
Most of the walks that we did were found using Viewranger.